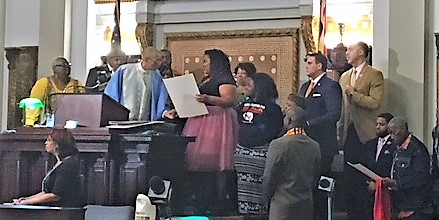 The Organization for Black Struggle, along with a few organizations, were honored for our consistent work for and with our community. The recognition was by the Black Caucus/Board of Alders during their annual Black History Month Program. Tempestt Tuggle accepted the proclamation on our behalf. Also on hand was Kendra Tatum and Jamala Rogers.

In March of 1965, peaceful protesters in the quiet town of Selma, Alabama, were confronted with violent police force, waking Americans to long-silenced injustices and hastening the passage of the Voting Rights Act. Recognized as the nation’s most effective civil rights law, the VRA was the result of a sustained, principled political struggle to defend the constitutional rights of all Americans. It inspired thousands of others across the country to join the civil rights movement.

Yet as we observe the 50th anniversary of the VRA’s passage this week, the commemoration is dampened by the fact that this hard-won legislation has been gutted by the Supreme Court. And with the one-year anniversary of the death of Michael Brown on Sunday, the nation has failed to address the inequities that still haunt black people in America. As we approach both remembrances this week, we must reflect, take stock, and recommit to the difficult work ahead.

A Survey of Ferguson Stakeholders and A Vision of Community Policing

The Ferguson Collaborative (formerly the DOJ Working Group) undertook our survey of Ferguson residents and stakeholders from a desire to raise up the voice of those directly affected by policing. It is from those voices, we believe, that the most effective solutions will be found. Our results were striking in five areas. We found:

The release of our Interim Report details just what our community has to say about policing. With these results in mind, and feedback from our community forum, we plan in the final version of this report to add a vision of what policing should be.1 We hope the survey and that vision can serve as guideposts for the Department of Justice as it implements the community mandate for change.

ST. LOUIS – Yesterday, Attorney General Loretta Lynch announced that the Department of Justice (DOJ) filed a lawsuit in U.S. District Court against the City of Ferguson, alleging a pattern or practice of law enforcement conduct that violates the First, Fourth and 14th Amendments of the Constitution and federal civil rights laws. This is following Ferguson City Council’s unanimous decision to sign the consent decree with new amendments.

The Organization for Black Struggle (OBS) is disappointed, but not surprised that the city of Ferguson has chosen to waste money in litigation rather than give its citizens justice. Residents of Ferguson came together months ago to demand empowered inclusion in the negotiations for a consent decree, one that adequately engaged the experiences of those most directly impacted by what was found in the DOJ investigations, to no avail. Despite being told by the DOJ and the City alike, that their participation would only complicate the process the Ferguson Collaborative, a group of residents and stakeholders leading the fight for justice and transformation in policing and courts, have been be able to get citizens involved.

Mayor James Knowles and city council members used each of the February hearings to evade accountability and to maintain the existing balance of power between the city and its residents. “First, the administration balances the books via over-policing and over-aggressive policing, then it attempts to shift the burden of remedying their previous injustice onto the very citizens who bore the brunt of their callous policies. Their behavior is not only paternalistic, in excluding community voices and undermining democracy, it exemplifies the racist politics that cost Michael Brown Jr., his life,” said OBS Executive Director Montague Simmons.

Instead of voting to accept the terms of the consent decree that were previously agreed upon, they introduced six new amendments. The worst of the six amendments would remove the successor clause, which would force any successor entity to abide by the terms of the decree. This amendment would effectively allow the city to circumvent compliance with the decree by dissolving the existing Ferguson Police Department and either replacing it with a new entity or contracting their services to another municipality. The City of Ferguson is attempting to evade any responsibility for the years of predatory, racist policing .

We urge the City of Ferguson and DOJ to support a fairness hearing for residents upon filing the agreement in the courts, as it will create an opportunity for legal intervention and empowered community engagement. We believe this is the only way to ensure the people of Ferguson receive accountability and transparency in this consent decree.

The Organization for Black Struggle will continue to support Ferguson residents in the fight for creating and re-imagining what policing could look like in this community – which is a right of every citizen and a basic functioning of a true democracy. “There is no cost that is too high to do what is right, there is no dollar amount we cannot afford that protects the rights of citizens. It is time to prioritize people. It is time to prioritize justice no matter how much it costs, because justice is priceless,” said Kayla Reed, OBS organizer.